Chamomile (Matricaria recutita) is an annual aromatic herbaceous plant belonging to the Asteraceae family, the same as calendula and cornflower, native to Europe and now widespread in all continents.

Known since ancient times, we find it mentioned and described in numerous herbaria for its calming and anti-inflammatory properties. The plant has an erect stem and flower heads, which are the part used for their herbal and cosmetic properties.

After the harvest, fresh and dried chamomile can be used for different purposes, in herbal teas, in infusion, in the essential oil made by distilling the flower heads, in the water and in the macerated oil obtained by macerating the dried flower heads in vegetable oils.

Chamomile is known and appreciated for its antispasmodic and anti-inflammatory activity, thanks to the presence of flavonoids and lipophilic compounds. It is also acknowledged as having healing, antibacterial, soothing and astringent properties.

Chamomile water is ideal for sensitive skin and its astringent characteristics make it an important treatment for cleansing and toning the face.

Chamomile is used in aromatherapy to treat anxiety and insomnia.

We can benefit from the properties of chamomile by using it as an infusion, macerated oil, water and essential oil.

Chamomile water can be found as an ingredient in our face toner, for cleansing and decongesting the skin, and for its astringent and regenerating action.

Chamomile has no special cultivation requirements and is propagated by direct sowing, spreading about 2 kg of mixed seed per hectare, preferably between late August and October.

Chamomile is often confused with Anthemis arvensis, also known as wild chamomile, which we find growing wild in uncultivated places, in fields and along the roadside.

Although it is considered an annual plant, the crop propagates spontaneously from year to year. Any unpicked flower heads will be the seed for the following year. For successful germination, the seed must not be buried. Simply rolling it into the surface of the soil is sufficient.

Chamomile is very adaptable but loves sunny soils and warm environments, while poorly tolerating stagnating water, which could cause the plant to rot. 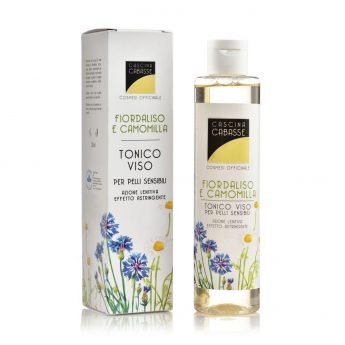